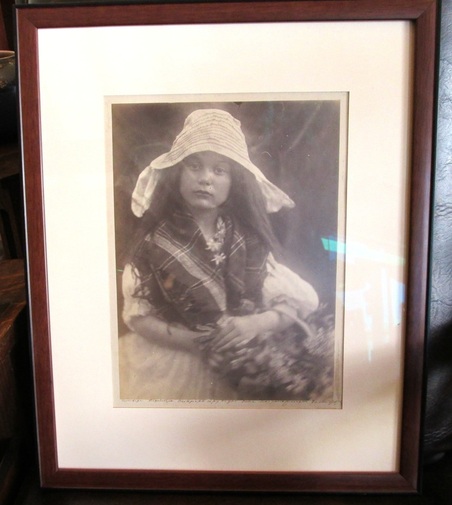 the photograph and old gesso frame
I had a good friend who has since passed away. He made his livelihood picking up great art and proffering his finds to Fine Art dealers all over the Bay Area. He did that for the better part of forty years.

He used to visit my shop and we would schmooze for an hour or two, talking about the world of art, great California painters, and the foibles of dealing with the collecting public. We shared a lot of laughter as well as insights into the range of people's characters with whom we had done business. I was also someone to whom he had sold California plein air paintings from time to time. I was grateful to have had the benefit of his practiced, eagle eye...

About ten years or so ago, I purchased a photograph from his estate as a memento of all the business we had done together and the great times we had shared. I bought it as much for the frame as for the picture in it. I thought the highly carved gesso roses and ribbons were very beautiful. And she, whom I believed was a little "Dutch" girl pictured with a bouquet of flowers? Well, I thought she was very beautiful too. I could see at the very bottom of the photograph some script. I couldn't make out any of it except for the last part which said Easter and 187 something. Well, I was born on Easter Sunday, so I thought it extra sweet that I could have it as a keepsake. I lived with the piece and loved it. I'm embarrassed to say I never really took the time to try to decipher the inscription below. After a good number of years, I decided to get a glass (my old eyes) to see if I could make out what was written below the image and to my surprise I made out the name: Julia Margaret Cameron and that began the second phase of my stewardship of the photograph...
The following from Goodreads:  "According to one of Julia Margaret Cameron's great-nieces, "We never knew what Aunt Julia was going to do next, nor did any one else." This is an accurate summation of the life of the British photographer (1815-1879), who took up the camera at age forty-eight and made more than a thousand images over the next fourteen years. Living at the height of the Victorian era, Cameron was anything but conventional, experimenting with the relatively new medium of photography, promoting her art through exhibitions and sales, and pursuing the eminent men of her time (Tennyson, Herschel, Carlyle, etc.) as subjects for her lens. For the first time, all known images by Cameron, one of the most important nineteenth-century artists in any medium, are gathered together in a catalogue raisonne.

In addition to a complete catalogue of Cameron's photographs, the book contains information on her photographic experiments and techniques, artistic approach, small-format photographs, albums, commercial strategies, sitters, and sources of inspiration. Also provided is a selected bibliography of all major Cameron publications, a list of exhibitions of her work, and a summary of important Cameron collections worldwide." 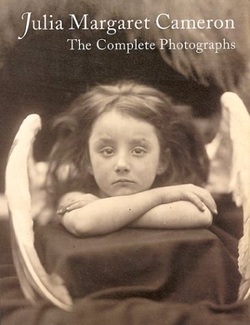 cover of Julia Margaret Cameron: The Complete Photographs
One entire section is devoted to Cameron's photographs of children. The following two paragraphs are excerpted from that section of the book:

"Julia Margaret Cameron was surrounded by children throughout her life. She more than fulfilled her role as a mother, giving birth to one daughter and five sons and adopting at least five other children. Others were related by blood or well known to her through social circles or life in Freshwater. Children were natural subjects for Cameron's art, and because of their ready availability as models, they inspired some of her earliest experiments."... 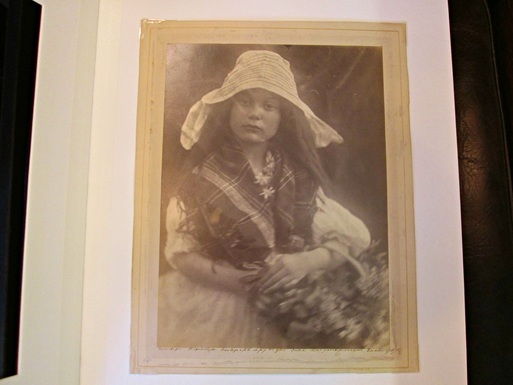 the matted photograph opened up to show the entire print including the Colnaghi gold line border
Here is the photograph in its present state. Albumen-silver Colnaghi print on original thin card mount with gold border. Annotated in brown ink "From life registered Photograph Copyright Julia Margaret Cameron  Easter of 1872"  14 x 10 in. (35.6 x 25.4 cm.)

This example is the only known copy of the image at the present time. It was viewed in person and authenticated by Julian Cox, July of last year.  It is in good condition. There is a reduction in the size of the card mount. What has been cut is a portion of the plain board outside of the Colnaghi gold line. This happened before I purchased it in order to fit the photograph into a previous frame. The border outside of the image also has a small area where the adhesive from an earlier mat adhered and compromised some of the paper when it was lifted. I'm told the border can be improved greatly with the proper restoration.
The following two paragraphs again from Julian Cox and Colin Ford's book, Julia Margaret Cameron, The Complete Photographs: 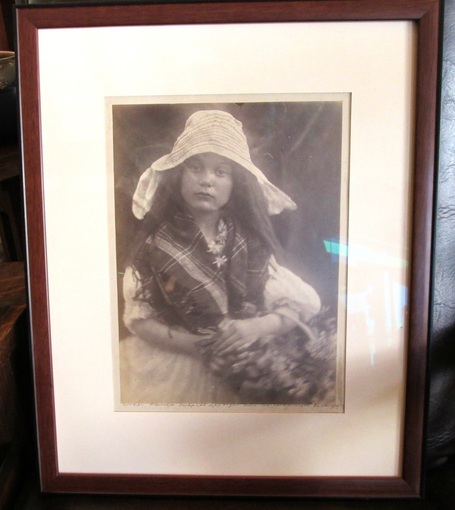 Julia Margaret Cameron's "Easter" in its new frame
So she has been rediscovered at last, quite unexpectedly. I'm glad to have been the one. For me it was a matter of loving beauty and an act of remembrance of a friend. I like to think Ken had an unseen hand in this exchange. He was a true connoisseur of Art, ahead of his time, and gone too soon. Now it is time to pass the photograph on again.

The photograph at present: